The Academy Award for the original screenplay of "Citizen Kane" auctioned for more than $861,000. 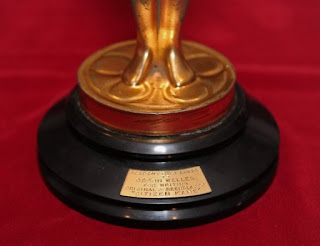 The Academy Award statuette that Orson Welles won for the original screenplay of "Citizen Kane" was auctioned for more than $861,000 in Los Angeles.
The 1942 Oscar was thought to be lost for decades. It surfaced in 1994 when cinematographer Gary Graver tried to sell it. The sale was stopped by Beatrice Welles, Orson's youngest daughter and sole heir.
Magician David Copperfield was among those clamoring for the golden trophy, but he was the runner-up bidder for the Oscar, which sold to an undisclosed buyer for $861,542, Los Angeles auctioneer Nate D Sanders said.
The slightly tarnished Oscar for 1941 best screenplay is one of just a handful of illustrious Academy Award statues to sell for near the million-dollar mark.
Posted by Tim Nyhus at 11:45 PM