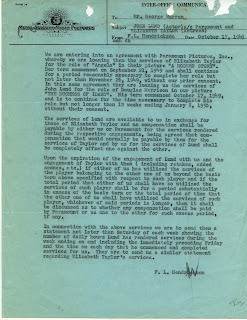 Elizabeth Taylor ORIGINAL 1949 MGM Inter Office Memo
Dated Octomber 17, 1949
An amazing piece of film history
This is an MGM Metro Goldwyn Mayer Studios Inter-Office Communication
To: Mr. George Warren Subject: John Lund (Actor) a/c Paramount and Elizabeth Taylor (Actress)
This memo is outlining an agreement between Paramount Pictures Inc where MGM is loaning the services of Elizabeth Taylor for the role of "Angela" in their picture "A Modern Story". Her term commencing September 21st, 1949 to complete her role but no later than November 26, 1949.  In this agreement Paramount is loaning the services of John Lund to MGM for the role of "Douglas Morrison" in "The Dutchess of Idaho".  The document in four paragraphs outlines the terms of the exchange between Lund and Taylor.
The film turned out to be"A Place in the Sun" aka "An American Tragedy" with Taylor as Angela Vickers.
This turned out to be one of the most one-sided exchanges in film history.
The document is an original and is from F.L. Hendrickson who was head of the legal department at MGM.
http://cgi.ebay.com/Elizabeth-Taylor-ORIGINAL-1949-MGM-Loan-Agreement-/130501786920?pt=LH_DefaultDomain_0&hash=item1e62833d28
Posted by Tim Nyhus at 3:49 PM