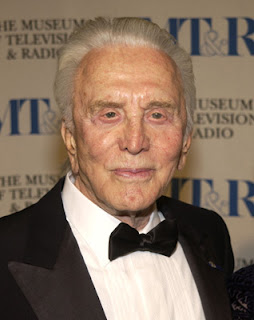 Hollywood legend Kirk Douglas will be a special guest at the 2011 TCM Classic Film Festival in Hollywood. During the festival, which takes place April 28-May 1, the three-time Oscar® nominee and honorary Academy Award® winner will join TCM host Robert Osborne for an interview on stage, leading into a screening of Stanley Kubrick’s epic filmSpartacus (1960), which Douglas also produced. The evening’s festivities will include clips from Douglas’ biographical one-man show, Before I Forget (2009)

“Kirk Douglas is an American icon whose performances have struck an indelible chord with moviegoers for more than 60 years,” Osborne said. “At the age of 94, he retains the great vitality and enthusiasm which has always been the Douglas trademark. We couldn’t be more pleased that Spartacus himself will be joining us at the TCM Classic Film Festival in Hollywood in April.”
Posted by Tim Nyhus at 12:44 AM